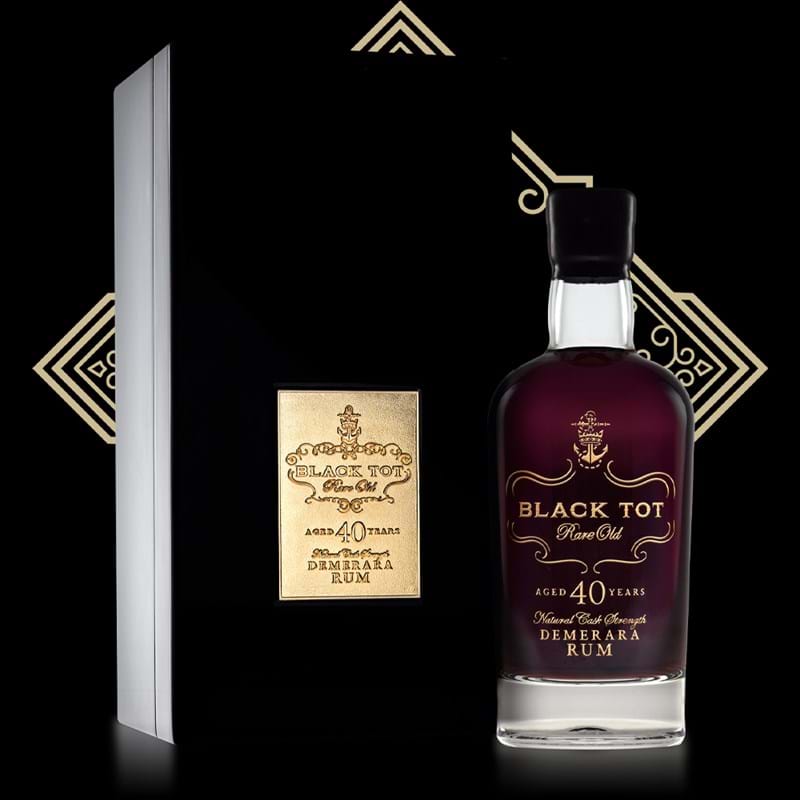 On 31 July 1970 the Royal Naval rum ration was discontinued. This centuries-old tradition entitled each sailor to a tot of rum each day, but was not compatible with the high-tech ships of the 20th century. In 2010, Black Tot Rum was launched to commemorate Black Tot Day. It was a blend of rums from the last consignment produced for the Navy, stored in flagons for decades before blending and rebirth as Black Tot. Black Tot 40 Year Old is the follow-up to The Last Consignment.

Distilled in Guyana in 1975, Black Tot 40 Year Old has been matured in casks for more than four decades. It is a celebration of rum and the skills of the distillers, produced from rich molasses and aged in oak. It is bottled with no additives, a pure expression of Demerara rum.

On the nose you get dense liquorice, star anise and fruity black olives roll out of the glass, accompanied by heady cigar smoke and fragrant pine. Warm and ripe citrus fruit – orange and lemon flesh and peel – blends with spicy cinnamon and nutmeg.

On the palate thick dark treacle and olive brine mix with cherry concentrate and charred oak. The texture is rich and heavy, enveloping your mouth and exploding with intense flavour. More smoke comes through on the palate, mixing with the flavours of plump sultanas, bittersweet raisins and juicy blackcurrants. Notes of liquorice and five spice intertwine with the fruit and smoke.

And on the finish the balance between sweet and savoury is extraordinary and keeps developing on the palate, creating a finish that lasts for an age.