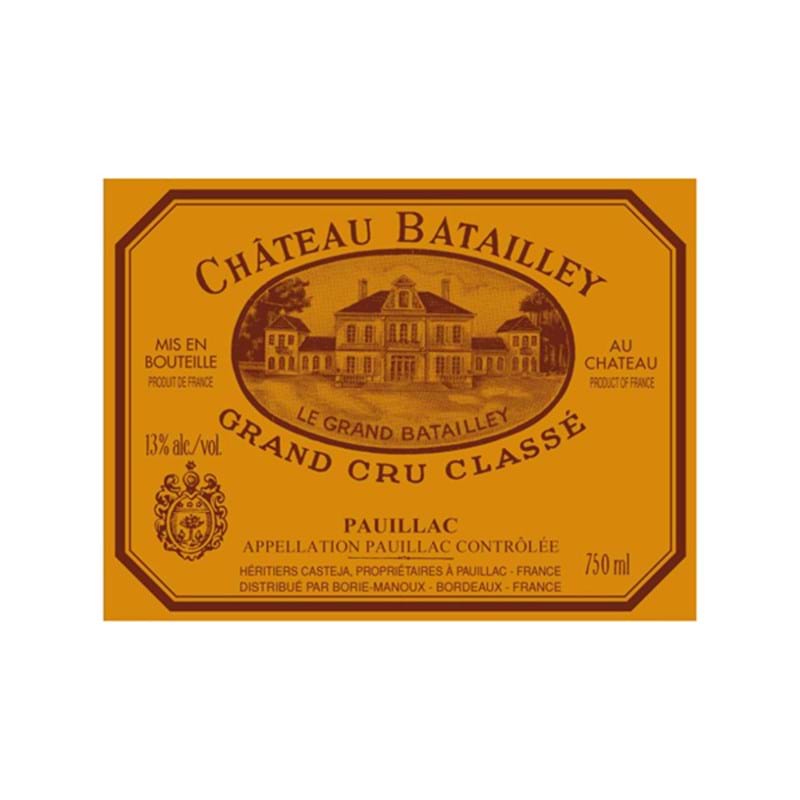 Château Batailley is one of the oldest estates in Bordeaux, dating from the 15th century. A 5ème Cru Classé, it is known for producing wines of consistently high quality and excellent value in a classic Pauillac style.

The vineyard sits on a plateau at the southern end of Pauillac, on the site of a battle between the French and the English during the Hundred Years War – hence the name ‘Batailley’. The estate has been owned by the Borie family since 1932, and is currently in the hands of family-members Denise and Emile Castèja of the famous negociants Borie-Manoux, which also owns Ch. Lynch-Moussas, Ch. Trotte Vieille and Domaine de l’Église. Ch. Batailley, considered to be the jewel in the family crown, is now managed by son Philippe Castèja and grandson Frédéric.

For years, Ch. Batailley has enjoyed a reputation as a reliable, well-priced Pauillac. Over the last 15-20 years, however, there has been a much greater emphasis on the quality of the fruit. The result has been wines of decidedly more finesse – still in the classic Pauillac style, and still one of the best value Cru Classé at any level.

Since 2014, Batailley has produced a second wine, Lions de Batailley, using grapes from some of the younger vines; it’s lighter in style but retains the signature profile of the Grand Vin.

The 57 hectares of vineyards are planted in classic Pauillac proportions: 70% Cabernet Sauvignon, 25% Merlot, 3% Cabernet Franc and 2% Petit Verdot. The deep gravel beds are ideal for the later-ripening Cabernet Sauvignon; the clay and limestone subsoil is equally favourable to Merlot. Grapes are harvested by hand, in parcels of roughly one hectare each.

Grapes are fully de-stemmed, then fermented in stainless steel tanks. Malolactic fermentation takes place partly in tank, partly in barrel, and the wine is then aged in 225-litre barriques, 55% new, for 16-18 months before bottling.

JAMES SUCKLING 94-95 points
"This is classically structured with a wonderful finish of extremely polished tannins and an ultra long finish. So much blackcurrant, spice and cedar. Seamless. 70% cabernet sauvignon and 26% merlot, the rest cabernet franc and petit verdot."

DECANTER 94 points
Tasted by Jane Anson (at Primeur week tastings in Bordeaux, 01 May 2021)
"Takes its time to unroll then shows sweetness to the black cherry and brambled blackberries fruits, followed by cigar, pencil lead and crushed stone. This is signature Batailley in that it has that essence-of-Pauillac feel. A delicious wine, such a great great drinking claret, really one to look out for in this vintage; already looking forward to drinking this in 10 years time. 2% Petit Verdot completes the blend. 60% new oak. A yield of 42hl/ha. Drinking Window 2028 - 2042."