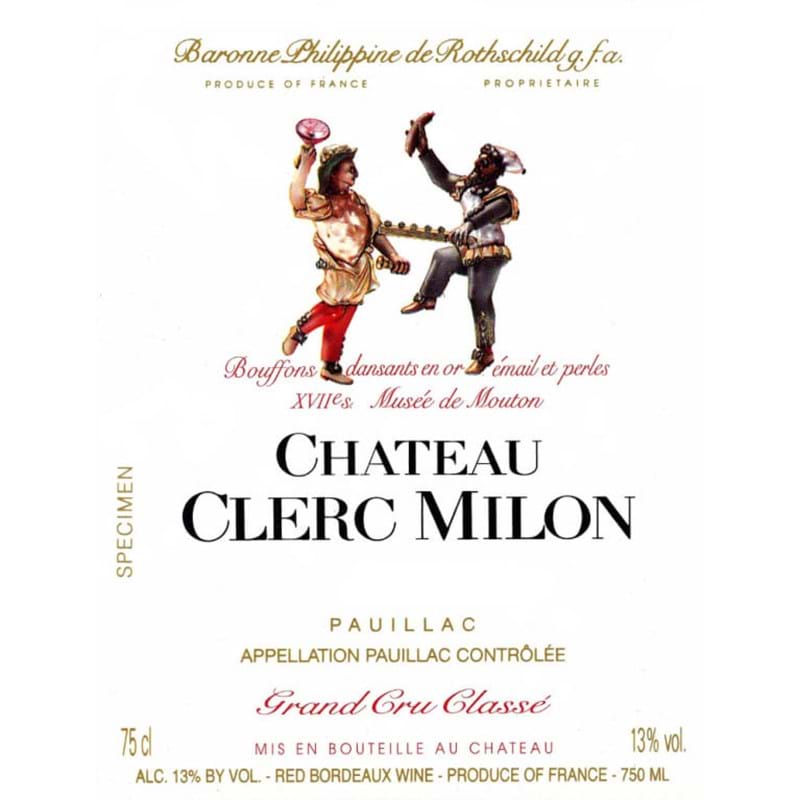 Fifth-growth Château Clerc Milon is one of a trinity of Pauillac classified growths owned by the Baron Philippe de Rothschild family. Baron Philippe began renovation and restoration here in 1970 – work that was later championed by his daughter Baroness Philippine until her death in 2014.

Baroness Philippine’s children, Philippe and Camille Sereys de Rothschild and Julien de Beaumarchais de Rothschild, now continue their mother’s legacy. In recent times, the estate has flourished under the careful stewardship of Director Jean-Emmanuel Danjoy. In 2020, his role expanded to include Ch. Mouton Rothschild and Ch. d’Armailhac and the talented winemaker Caroline Artaud joined the team at Ch. Clerc Milon in the capacity of Director.

Ch. Clerc Milon’s vineyard holdings – just over 40 hectares – neighbour two first growths, Ch. Lafite and Ch. Mouton Rothschild. Half of the vines are Cabernet Sauvignon, with the remainder being Merlot (37%), Cabernet Franc (10%), Petit Verdot (2%) and Carmenère (1%). The vines have an average age of 53 years. Harvesting here is done by hand.

A huge amount of work has been done to improve the winemaking facilities. In 2007, the gravity-fed vat room was inaugurated; three years later, in 2011, work was finished on the winery, cellars and tasting room.

THE WINE ADVOCATE 92-94 points
Drink Date: 2025 - 2040
Lisa Perrotti-Brown, 20th May 2021
"The 2020 Clerc Milon - a blend of 53% Cabernet Sauvignon, 37% Merlot, 8% Cabernet Franc and 2% Petit Verdot with just a splash of Carmenere - has a deep garnet-purple color, opening with notes of tar, unsmoked cigars, bouquet garni and graphite, giving way to a core of ripe black and red currants, boysenberries and tree bark, plus a touch of black olives. The medium-bodied palate delivers fantastic tension and impressively ripe, fine-grained tannins to support the crunchy, energetic black fruit flavors, finishing with a lively herbal lift."

“The vintage went quite well—not as extreme as 2018,” said Jean-Emmanuel Danjoy, the new estates manager, formerly the winemaking director at Clerc Milon, now overseeing winemaking for Mouton Rothschild, Clerc Milon and d’Armailhac, following the retirement of Philippe Dhallhuin last year. “There was no excessive heat, no sunburn damage, no blockage on the vines. It was an extremely early vintage, but, because of the earlier budbreak, it was also a long growing season—180 days. Usually, it is around 178 days.”

JAMES SUCKLING 95-96 Points
27 Apr, 2021 – "Very pure character to this wine with crushed fruit and round tannins. It’s really transparent and delicate, yet bold at the same time. Super tannins. Vivid. Very primary and berry-like. May well turn out to be even better than this in bottle."

DECANTER 94 points
Tasted by Jane Anson - Part of Best Pauillac 2020 wines tasted en primeur
"Powerful, a little austere with tight black fruits that will benefit from adding flesh over ageing, as the tannins are a little angular right now. The freshly crushed mint leaf finish is beautiful, and this is is ripped with powerful nuanced fruit, tobacco and earthy flavours, followed by waves of violet flowers. Good quality, not as exuberant as some years of Clerc Milon. First year of Caroline Artaud to oversee the entire vintage, as Jean-Philippe Danjoy has headed over to Mouton. 2% Petit Verdot completes the blend. 50% new oak. There is also 0.6% of Carmanère in the blend. Drinking Window 2028 - 2044."