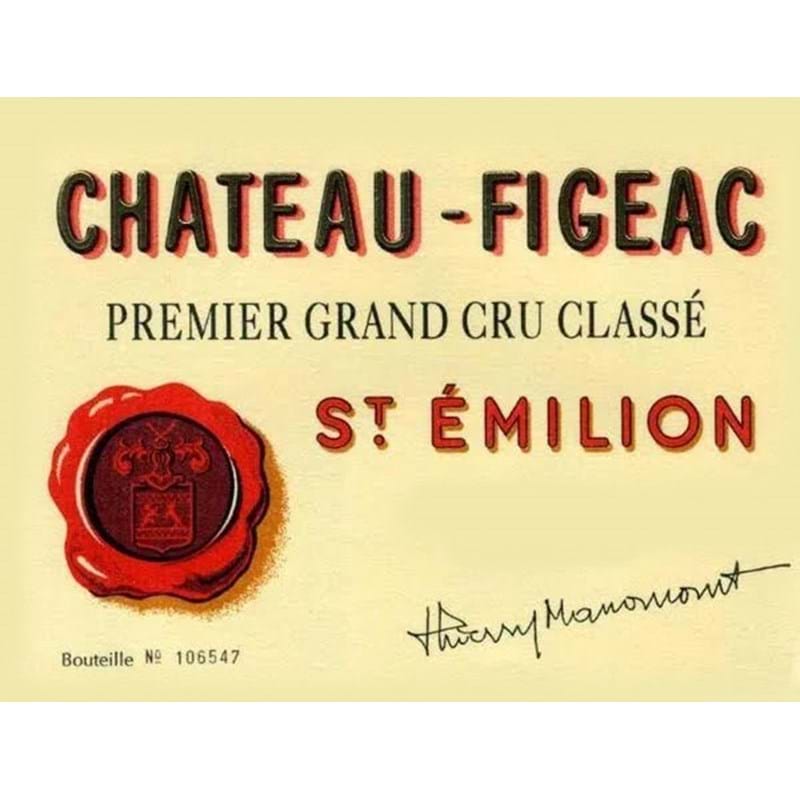 Château Figeac is one of the leading St. Emilion estates and its wine, with its high Cabernet content, has often been described as the most Médoc-like in St-Emilion. Since 2010 Figeac has been managed by Comte Eric d’Aramon and his wife Laure. It is located in the north-west of the appellation with its vineyards adjoining those of Cheval Blanc. Its 40 hectares of vineyards (Cabernet Sauvignon 35%, Merlot 30%, Cabernet Franc 35%) lie on a deep, Médoc-like gravel topsoil ('Graves') over a flinty, iron-rich subsoil.

The alcoholic fermentation takes place in wood and the malolactic in stainless steel. The wine is matured in 100% new oak barriques for 18-22 months. Ideally, the wines need at least 10 years-bottle ageing to show at their best. Figeac is classified as a 1er Grand Cru Classé (B).

THE WINE ADVOCATE (96 - 98)+ points
Drink Date: 2027 - 2057
Reviewed by: Lisa Perrotti-Brown, Issue Date: 28th May 2021, Source: End of May 2021, The Wine Advocate
"The 2020 Figeac is a blend of 37% Merlot, 32% Cabernet Franc and 31% Cabernet Sauvignon, weighing in with an alcohol of 13.9% and a pH of 3.7. Opaque purple-black colored, it bursts from the glass with a beautifully vibrant initial wave of pure, pristine black fruits: fresh black cherries, juicy black plums and ripe blackcurrants. With swirling, a whole array of floral and spice notes is unleashed: lavender, ground cloves, cumin seed, cardamom and rose oil. The medium-bodied palate is surprisingly graceful for the intensity of aromas, featuring ethereal, perfumed black berry notes, framed by a seamless line of freshness and ripe, grainy tannins, finishing on a lingering fragrant earth note. Far more cerebral and quietly introspective than it is hedonic, this could only be Figeac.

So, I caught up with Frédéric Faye on a Zoom call from his Paris hotel room, where he was participating in very detailed (and, no doubt, extremely heated) discussions surrounding the forthcoming Saint-Émilion reclassification. As a reminder, Figeac has been ranked Premier Grand Cru Classé B since the very first classification, in 1955. But given recent changes—30% of the vineyard replanted since 2009 and a whole new winery—and its clear upward trajectory in quality in recent years, all eyes are now pointed toward the realm of Premier Grand Cru Classé A for this estate. I got stressed just imagining how stressed Faye must have been. If he was about to spontaneously combust, it certainly didn’t show.

“Everyone thinks that if you have a drought, it must be bad for Figeac,” Faye began. “But we have a lot of clay in our soils and we have a lot of older vines. Still, this vintage was not really easy. The weather conditions were extreme. The Cabernet Franc started to suffer—but then the little bit of rain in August finally pushed the Cabernet Franc through veraison. It was one of our longest harvests ever. We harvested over five weeks! We started on 4th September with just one plot of Merlot—to maintain that freshness. Then we waited. I knew what I wanted. We are a large estate and we have a lot of plots, so I need to begin to do the blending in the vineyard. In the end, it was a vintage of terroir and of decisions—human decisions.”

As a reminder, Figeac is a little unique in its blend, being composed of nearly equal parts Merlot, Cabernet Franc and Cabernet Sauvignon. This year, the blend has a plush, juiciness from the Merlot, a brightness from the Cabernet Franc and a taut, structural element from the Cabernet Sauvignon, all knitted together beautifully and truly singing, “FIGEAC!,” loud and clear. Deliciousness aside, it’s a wine I highly recommend for this evocative attribute alone."

JAMES SUCKLING 97-98 Points
14 May, 2021 – "This is a really sophisticated young wine with tobacco, crushed stone, currants and dark chocolate on the nose, following through to a medium to full body with intense yet linear tannins and a spicy, fresh finish. Some cloves and black pepper. Graphite at the end. Very long. 37% merlot, 32% cabernet franc and 31% cabernet sauvignon."

DECANTER 96 points
Tasted by Jane Anson (at Primeur week tastings in Bordeaux, 01 May 2021)
Part of Best St-Emilion 2020 wines tasted en primeur
"This delivers concentration and intensity, a ton of black fruits, definitely Cabernet dominant in terms of fruit, and its slightly serious character, with a whoosh of juice on the finish. An extremely elegant and controlled wine, with savoury bilberry and loganberry, then peony and tobacco leaf as it opens. Tannins are finely layered but there are a lot of them. Not an exuberant Figeac, but this is rarely a wine that rushes out to seduce, it takes its time and has ageing potential in spades. The gravel soils in the drought of the summer meant the grapes slowed their ripening process, although only the youngest vines suffered blockages, and that combined with the high Cabernet content of Figeac means lower alcohols than the past few years, giving a classic balance and a feeling of effortless success. 75% of the production went into the first wine. Harvest September 4 to October 1, a full five weeks. Their final yield here was around 37hl/ha, (higher than in 2019 at Figeac, which was 34hl/ha). As with on the Left Bank, the Cabernet Sauvignons were the lowest yield (30hl/ha), with tiny berries so had to be careful with the extraction. First vintage in the new cellars. Drinking Window 2029 - 2046."

JANCIS ROBINSON 17.5+ points
Drink: 2028 - 2045
37% Merlot, 32% Cabernet Franc, 31% Cabernet Sauvignon. 77% of production. Cask sample.
"Gentle, juicy and pure with nothing overdone. Merlot provides the broad-brush sweetness on attack, the Cabernet the fresh, minerally notes on the finish. Fine grain of tannin and aromatic complexity on the nose and palate; the finesse is there."