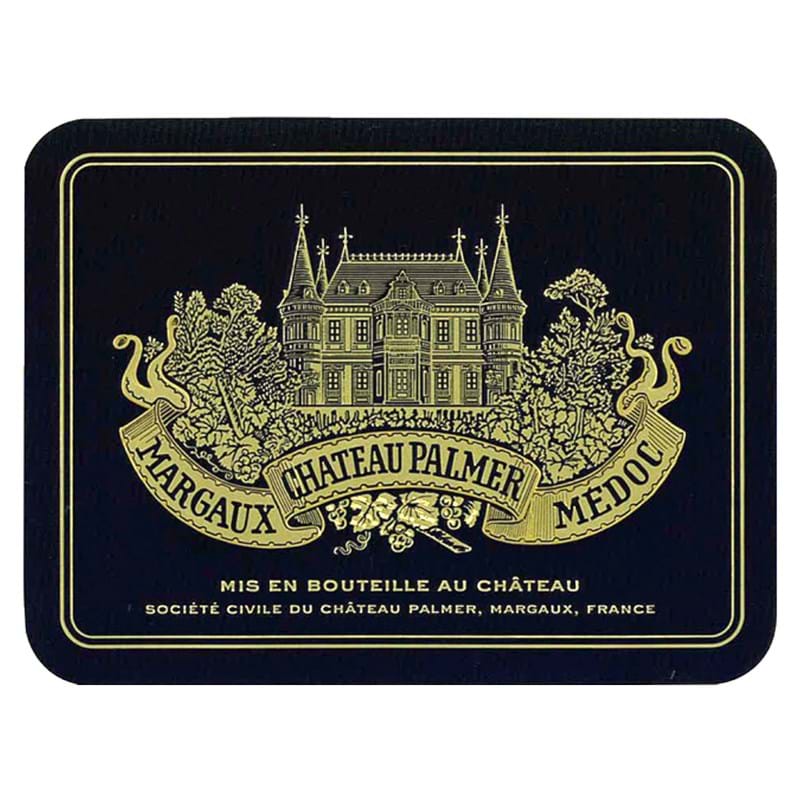 Château Palmer is a leading wine estate in Margaux. Within its appellation, Palmer is certainly the closest rival to their first growth neighbour, Ch. Margaux. Although officially ranked a third growth, at their best the wines of Ch. Palmer are among the greatest anywhere in Bordeaux.

The estate dates to the 17th century, though it was not until 1814 that Englishman Charles Palmer took ownership and gave it his name. In 1938, the estate was bought by four Bordeaux négociant families, two of whom – the Sichel and Mähler-Besse families – own the property today. Since 2004, the estate has been led by the charismatic agronomist and oenologist Thomas Duroux, who had lately returned from a stint making wine at Ornellaia, in Tuscany. He undertook major renovations including a complete modernisation of the grape reception area, the vat rooms and barrel cellar. In the vineyards, the technical team began experimenting with biodynamic farming and today Palmer is among the leading biodynamic vineyards in Bordeaux. In addition to the Grand Vin, the Ch. Palmer portfolio also includes a cuvée called Alter Ego. Introduced in 1998, Alter Ego is produced from grapes grown on dedicated plots and with a different blend from that of the Grand Vin. As such, Ch. Palmer regard it not as a second wine, but very much as a distinctive cuvée in its own right.

The estate lies just outside the village of Margaux, its 66 hectares of vines planted on a plateau of gravel, sand and clay soils overlooking the Gironde estuary. Plantings include equal parts of Merlot and Cabernet Sauvignon at 47% each, along with 6% Petit Verdot. Although the average age of the vines is fairly typical of the region at about 40 years, some of the vines are over 70 years old. That, along with the relatively high Merlot content and the benefits of careful, well-established biodynamic practices, may account for both the richness and complexity of the wines.

Fermentation takes place in conical, stainless steel vats in varying sizes, to permit each variety and parcel to be fermented separately for subsequent selection and blending. The Grand Vin is aged for 20-22 months in barrel, of which less than 50% is new. Thanks to the health and consistency of their biodynamically produced fruit, Palmer have been able, over the past few years, to begin safely reducing the amount of sulphur added throughout the process, with the aim of producing wines with more freshness and purity of flavour. For Alter Ego, less new wood is used, and ageing time is slightly reduced with a view to producing a wine they describe as “distinguished by its freshness of fruit, crisp intensity and richness from the moment out of barrel”.

Between 2008 and 2013, Ch. Palmer made the transition to 100% biodynamic farming. In addition to its vineyards, the estate is home to a diversity of complementary plants and grazing animals.

DECANTER 97 points
Tasted by Jane Anson(at Primeur week tastings in Bordeaux, 01 May 2021) Part of Best Margaux 2020 wines tasted en primeur
"Vivid colours, and the aromatics grab hold straight away. This is intense and concentrated, elegant, balanced and classical, all about the texture which is velvety and seductive with softly-grained tannins. Moves oh so slowly through the palate with dozens of layers to get hold of. The overall feel is precise, slow and seductive, with appellation and estate signature at every turn. Sappy, hawthorn freshness, rosemary, redcurrant, tobacco, cigar box and dark chocolate shavings on the finish. 3.77pH, 78IPT, 55% of overall production, with 13% press wine. Drinking Window 2028 - 2044."

JANCIS ROBINSON 18+ points
Drink: 2028 - 2050
48% Cabernet Sauvignon, 48% Merlot, 4% Petit Verdot. Cask sample.
"The Merlot provides the broad sweep and touch of sweetness on entry, the Cabernet the fine but punchy tannins that drive the wine. Lots of life and persistence, the tannins fine-grained and fresh. Clear potential."