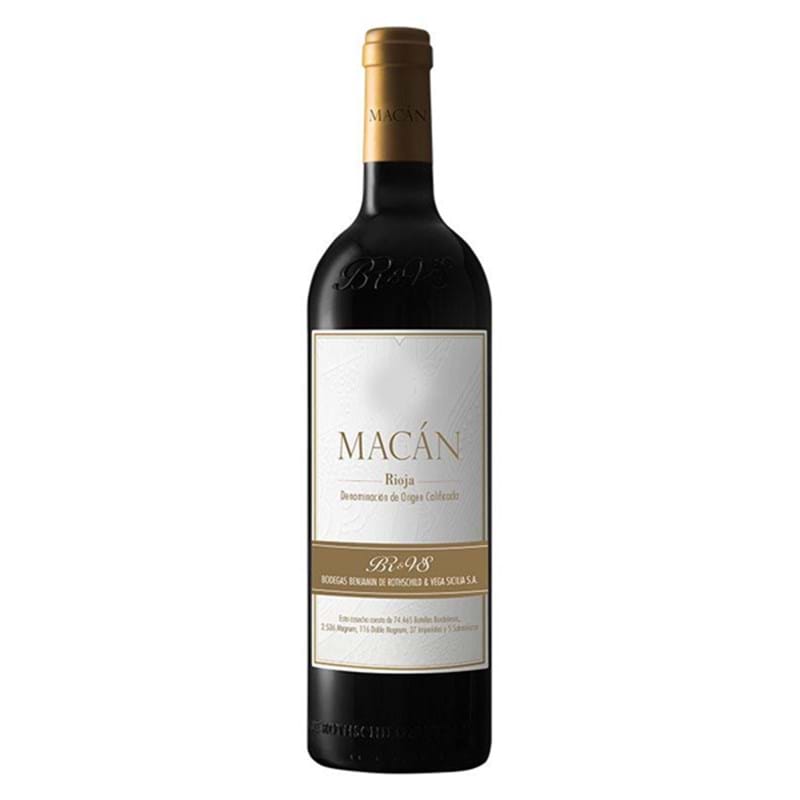 Macán is a modern and very personal take on the highly expressive wines of the DOCa Rioja. It is a commitment to finesse, elegance, complexity and power. And it is the flagship of Bodegas Benjamin de Rothschild & Vega Sicilia, the project launched by Tempos Vega Sicilia and the Compagnie Vinicole Baron Edmond de Rothschild in 2004. 2009 was the first vintage released on the market, and this 2016 Macán endorses the work achieved over these years. Knowledge, effort, patience and a spirit of constant improvement have boosted the growth of a project that currently resides on a 92-hectare estate of high-quality vineyards and cutting-edge production facilities.

Macán is made only from Tempranillo, grown on a meticulous selection of mature plots found on high terraces with poor gravelly soils of a loamy-calcareous nature. During fermentation, in this first year of the new winery, the extraction was very precise and the evolution of the oak has led to better integration in the ageing phase, which took place in barrels (50% new) of French origin and a 4,000-litre foudre for sixteen months.

The Vintage
The 2016 vintage was marked by abundant rainfall in the winter months which built up water reserves, and were key to overcoming a very dry and relatively hot summer. The budbreak occurred on 20 April, somewhat later than the previous year, while flowering took place on 20 June. In the months of August and September, water stress situations exacerbated the slow ripening caused by a large crop on many plots throughout La Rioja. However, the moderate rains that fell in the third week of September helped the small berries reach full maturity, and restored faith in this excellent harvest, which took place from 17 September to 3 October.

Tasting
Macán 2016 is the realisation of the bodega’s ideal style. It is a wine of density, but at the same time, it is fresh, deep and harmonious.

THE WINE ADVOCATE Rating: 94+
Drink Date: 2020 - 2028
"The 2016 Macán saw a new vinification by plot with the introduction of their new fermentation room. The Tempranillo came from selected vineyards from their 92 hectares; it fermented in oak vats and matured in 4,000-liter and barriques (50/50) for some 16 months and was kept in bottle for three years before being released. They think this 2016 is finally the style they were looking for, a wine with density and freshness. 2016 was the first year they vinified and aged from start to finish in the new winery, and they believe that gave them better control over the fermentations. 2016 is a year with more freshness than 2015, and they are trying to achieve wines with more tension and less power and oak than in the beginning. This could very well be the finest vintage of Macán so far. The grapes were picked between September 17th and October 3rd. 87,792 bottles, 2,570 magnums and some larger formats were produced. The wine was bottled in September 2018.

The joint venture between Benjamin de Rothschild and Vega Sicilia has a new fermentation chamber in 2016. They have also started using 4,000-liter oak vats for the aging of the wines, looking for less impact from the wood. The 92 hectares of 40-year-old vines in the villages of Ábalos, Labastida, El Villar and San Vicente de la Sonsierra produce some 300,000 bottles per year." - Luis Gutiérrez, 30th Dec 2020