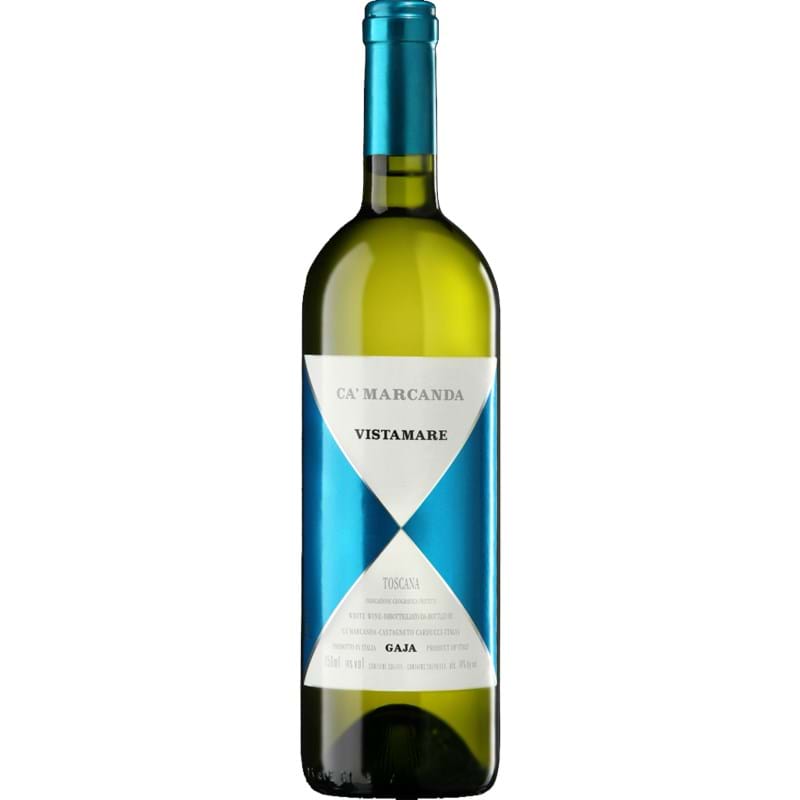 “Vistamare” means sea view and is often used by the coastal hoteliers to entice would-be guests, even though their rooms may only offer a limited view of the Mediterranean. The vineyards used for Vistamare actually enjoy a panoramic view of the Tuscan horizon and their grapes are gently touched by the salt air and brilliant colours of the Tuscan sea. Made from 40% Vermentino, 40% Viognier and 20% Fiano Vistamare 2019 is layered and complex on the nose, based on broom and jasmine, followed by gooseberry, flint and rich accents of honey. It is far delicate, yet not too stressed on the sweetish notes. Intensely fragrant with hints of peach stone, skin of citrus fruits, mango and sage. Creamy, with vibrant acidity, smooth and a refreshing finish.
Enjoy with Grilled and Roasted White Meats, Fish/Shellfish (especially Mussels), Salads and Picnics, Mature Strong Cheeses.

The pioneering Gaja family has been growing vines and making wine for five generations, a tradition they started in 1859 in Piedmont. Each generation nurtures the dreams and vision of the previous one, building and innovating for the next. Above all, they are inspired by respect for nature and believe attention to detail is paramount.

Without a doubt, the name Gaja is synonymous with innovation and each generation has brought something new. Clotilde Rey drove the direction of quality, her son Giovanni continued this legacy as well as acquiring some of the best vineyards in Barbaresco including the three ‘crus’ for which Gaja is best known:  Sorì San Lorenzo, Sorì Tildìn and Costa Russi. Angelo introduced new methods with higher density planting, green harvesting, lower yields, temperature controlled vinification, shorter macerations, large barrique ageing and longer corks.

Ca’Marcanda – Bolgheri is the birthplace of modern Italian wine – where new world meets old. A perfect home for 5th generation Gaja to continue to innovate.

The beautiful Gaja winery is located in the heart of Barbaresco. Founded by Giovanni Gaja in 1859, it has been owned and operated by five generations of the Gaja family. It is now owned by Angelo Gaja, the founder’s great-grandson.

The Pieve Santa Restituta estate in Montalcino produces three Brunello di Montalcino wines from across 65 acres of vineyard holdings and became part of the Gaja estate in 1994.

After no less than 18 trips to complete the negotiations, the purchase of the historic 100ha Bolgheri estate in Tuscany took place in 1996 and is now known as “Ca-marcanda” – the house of endless negotiations. It was then another six years before Italian architect Giovanni Bo would complete the design and construction of a state-of-the-art winery, bringing to life Angelo’s vision for the building to blend discreetly with its surrounding.  Built underground, the layout and design allows for the precision necessary to craft exceptional wines with minimal intervention.